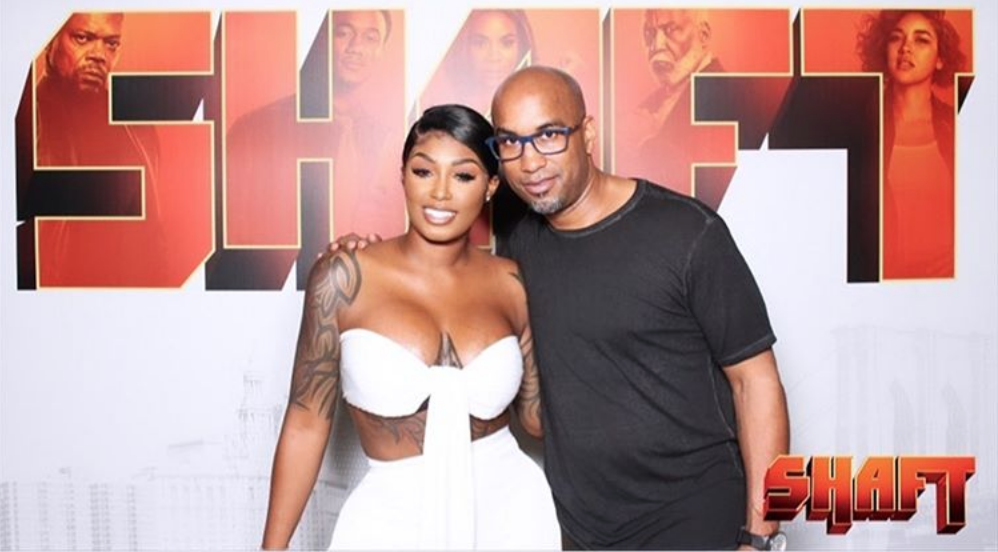 Actress Domonique G.I. Jane Williams Discusses How A Brief Encounter With Will Packer Led To Her Acting In “Shaft”

The new actress on the block, Dominique “G.I. Jane” Williams, will surprise and motivate you with her story of perseverance and her journey to making it on the big screen of the new Shaft movie. While working as a bartender serving Will Packer and his wife, Williams, fun and charismatic personality led Packer to share his contact with her for an upcoming film role. After losing his contact information, the Universe, God, the cosmos all aligned to give Williams a second chance at an audition. Six months later after reaching out to friends and colleagues, Williams, was finally able to reach Packer. I know you are thinking God was really on her side, but talent also pushed its way through because Williams did her audition while being on bed rest with pneumonia! Obviously impressed enough Packer booked Williams with her first acting role alongside Samuel L. Jackson. Let us get a little more reel with the Cincinnati, OH actress below.

Meah Denee Barrington: Can you tell me a little more about the movie Shaft? How did you feel about your performance after watching the movie?

G.I. JANE: No lie, I thought it was going to be horrible! I thought it was going to be the worst thing ever! I was so scared and everyone was like “let’s go see your movie.” In my mind I’m like “yeah, sure, let’s go,” but I’m really thinking like “Oh My God,” they are going to see I’m a horrible actor. When I saw it I thought, “Oh I did good!” Even my friends who actually act said I did good, so I was amazed and shocked.

Initially, it was uncomfortable for me because I hadn’t acted before. I had to kiss Samuel L. Jackson, and I’m not even a kisser in real life! So imagine I’m kissing Samuel L. Jackson in real life and it must not have been that good because we shot it so many times, and it didn’t make the cut! So it’s funny when people watch the film they see the part of the movie where Samuel L. Jackson and I are leaning against the door and we are so close to each other, it looks like we are about to kiss, and we really did but they cut that part out!

MDB: What did you learn from being on set with Samuel L. Jackson? How was your experience?

GI JANE: Well, being on set was like the first day of school! It was like, “Oh my god I’m a freshman and I’m here with the seniors and I just want them to like me.” Samuel L. Jackson was really cool, he coached me through it. Surprisingly, they treated me like royalty. I don’t know if it is always like this since it was my first major film but it was dope! I got my own trailer, I didn’t even have to put my own shoes on.

Samuel L. Jackson was probably the coolest person.  I really thought he was going to be like “Who is this girl? I’ve never heard of her. Where did y’all get her from?” Samuel would explain to me different ways to do the lines, and he didn’t have to do that. So watching him be nice to me showed that he actually took an interest in that scene, that role, or even me.

MDB: I know you earned the nickname G.I. Jane after enlisting into the military during your junior year of college, but what made you want to stick with that nickname?

G.I. JANE: I thought it was so cool! One, because my hair cut, so I related to the name more and then also because it stood for something. It embodies strength, beating the odds, and being an underdog. Things that I have always identified with myself.

One of my friends actually said I’m their favorite superhero. I asked what superhero is that? They said G.I. Jane. My friend told me when they think of superheroes they think of real people. Rosa Parks, G.I. Jane, you know people who defeated the odds. It was really moving for my friends to address me as such and I thought it was a perfect nickname to have and so I just ran with it.

MDB: For you with all these experiences like battling cancer, uprooting yourself from Ohio, leaving college to enlist in the army, and watching your grandmother battle cancer several times, what would you say was probably your biggest lesson through all of that?

GI JANE: That is a good question. I’ve had so many different lessons from the tests that I have faced with cancer, the military, and a whole bunch of other stuff. I think the lesson that I learned the most was to stay in good faith because faith is what really got me through all of these things.

There were times when I had doubts, there were times where I didn’t know what I wanted to do, and I had no clue what path I wanted to go on. That’s actually how I ended up being in Atlanta, but through it all, I believe what kept me grounded was believing that there was a divine purpose in what I was going through.

I think that sometimes the things that you go through are not necessarily for you. Every day, there is someone telling me a story about something that they went through and how my story helped them. Even though my story has helped me, it has helped a lot of other people as well. Sometimes it takes sacrifice on you to help the masses of people, and I am okay with that.

Williams is not letting up any time soon. Currently, working on several television series pilots the new actress is multitasking her butt off with the new release of her cosmetics line. The hair, skin, and body line debuts in August 2019 and focuses on empowering and giving strength to cancer and alopecia patients.