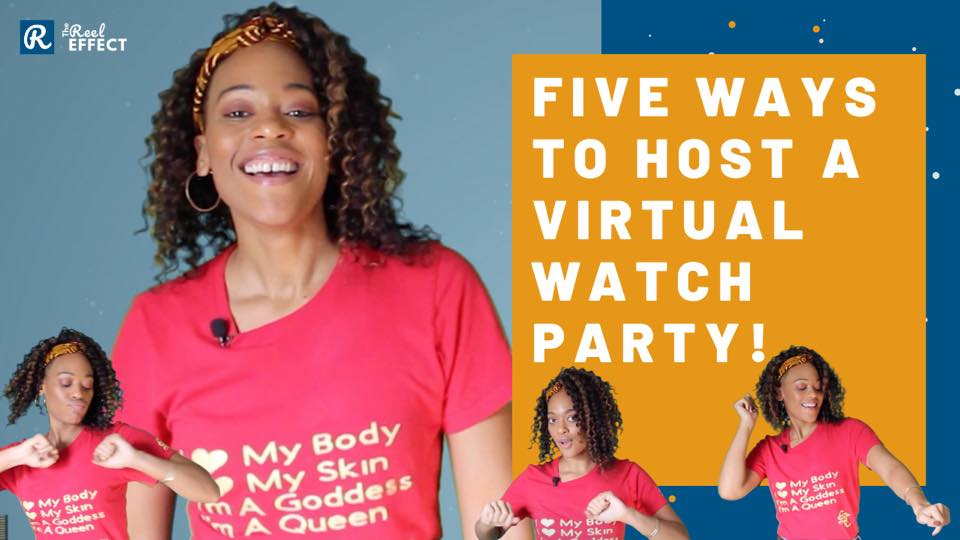 The pandemic has been hard for everyone and that is why we wanted to give our audience a refresher and drop new ways you can connect with your loved ones from afar. On our latest episode of The Reel Effect, our host Meah Denee Barrington, discusses five streaming services and apps that allow you to have virtual watch parties with your family and friends. We also give you some movie options for each streaming service! Watch the video above or read the list below.

The pros about using the Zoom app to have a movie watch party is that you can use it for FREE along with 100 other people, and only one person needs to make an account. You simply send out the Zoom link and anyone can join in on the fun. This is definitely the cheapest, most flexible option on the list but there are some bad qualities to using Zoom. One being you can only use the free version for forty five minutes at a time, unless you upgrade. Also, the video quality is spotty and can easily lag if your internet is not strong, un-syncing your video and audio.

Movie suggestions are that you can watch anything you want! Along with DVDs and any streaming service you have an account with you can have a great video night!

One of the first watch party options has been through Netflix where you can watch anything on the streaming services alongside your family and friends as long as they have a Netflix account. You can easily watch a movie with up to 50 people by downloading a quick Netflix Party extension (only available on Chrome and Opera browsers) to your computer. Here’s a quick how to video you can watch! Some more features of Netflix Watch Party are that the video quality is very good, and you can also text chat with the other viewers during the movie. So make sure you download the extension and get to sharing that link with your family and friends and have a great time! Check out a few movie suggestions below:

Another great option is Hulu, its features are similar to Netflix’s, like everyone needing a Hulu account to tune into the watch party, but Hulu does have their own pros and cons. First, you don’t need to download an extension to have a watch party, you can easily create a watch party right in the Hulu app.

Directions via Wired.com: “Go into the show or movie you want to watch. There’s an icon right next to the play button that looks like three people with a play arrow on the top. That’s the Watch Party button. Click it, then click “Start the party.” That will take you to a screen with a link for your viewing session. Copy that, send it to your friends, then click “Start party” once everyone has joined.“

They also have great video quality and the text chat option that allows you to speak to each other during the movie. The worst part about the Hulu Watch Party option is you cannot watch everything on Hulu, there are limitations. Those being you cannot watch live television within a watch party, or “premium ad-on content.” To make it easy we included a list of movie options for you below:

The newest streaming service to add a watch party feature is Amazon Prime. Once again you must have an Amazon Prime account to enjoy this feature, and thankfully you don’t have to download any extensions to make this work. Similar to Netflix and Hulu this streaming service also provides great video quality for its watch party. The worst part about using Amazon Prime is that you can only watch content from Amazon Prime’s video library. This includes its original shows and some licensed movies but you cannot watch anything you buy or rent.

New to most of us is the Scener, this is a third party option, probably the best option on this list. Scener is an extension you can download that provides great video quality and allows you to watch content from several streaming services like Disney Plus, Netflix, Vimeo, HBO Go and/or Now. Anyone using Scener has to download the extension, as well as have an account to the streaming service they are using.

Directions via Wired.com: “To start Scener, just click the extension logo and a separate window will pop up. From there, press “Create a theater” and choose between a private or public screening. Then select your subscription service of choice (you’ll have to log in if you haven’t already) and it should pop right up. In the chat window to the right, you’ll see the option to enable video chat and an invite link to send to your friends. A handy “pass the remote” feature lets you toggle who gets to pick what to watch next and who has control during playback.”

With Scener anyone can have a public watch party with an unlimited audience or a private screening with up to 10 people. On top of that, Scener has a video chat feature, allowing up to 10 people to see and chat with each other at a time. Check out a few movie suggestions below: