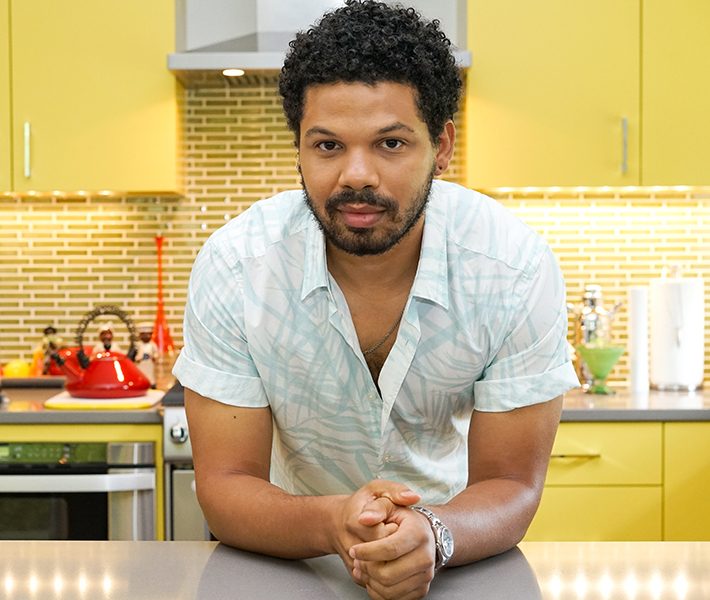 Growing up I always knew the Smollett family, never knowing exactly where I saw them first, they were just an entertainment family that came in and out of my list of weekly black television shows. I was very young when they appeared on shows like On Our Own but because I remembered seeing a light skin little girl (Jurnee Smollett-Bell) that looked just like me on shows like Hanging with Mr. Copper, Full House, and later the iconic Eve’s Bayou the family slowly meshed into my childhood.

Over the years the Smollett’s have appeared in dozens of television shows and not just dramatic pieces but actually hosted their own cooking shows one being the new Cleo TV cooking show, Living by Design with Jake and Jazz. A few months ago I had the pleasure of speaking with Jake Smollett about his cooking journey and how cooking how molded his family and career.

Meah Denee Barrington – What inspired you to start cooking? I know your mom was a big influence but was there a moment where you thought “I can definitely do this for the rest of my life?”

Jake Smollett – Yea my cooking inspiration definitely was my mom, is my mom still to this day. She’s from New Orleans so cooking for her is a big deal, in our household. Growing up I started cooking when I was six years old. I realized I kind of wanted to do it as a career when I was 15 I started a vegan pie company. That was in local seven California grocery stores, and then from I started producing my own cooking shows in my apartment, airing them on the transit tv bus system. The theme of the show was $10 dinners so that turned into people writing in for my recipes and that turned into a blog, and the blog turned into doing a show for food network and now I have a cookbook out. So it kind of just spiraled into what it’s become now but it’s always been a passion of mine since a child….cooking.

MDB – Re-emergence of the Smollett family. What’s your view on that? Do you feel like it’s a time where everyone is really hitting their peaks when it comes to their careers and showcasing your talents?

JS – Yea I mean I think that most people hit their career peaks in their 30s and you know there are so many ebbs and flows in this industry period. I was born into this. I’ve been in it my whole life. I’m 29 right now and just starting to see some work pay off and that’s just how it goes. It takes serious patience. It takes a lot of effort and just not stopping. We’ve been blessed to be able to do what we love and keep at it. I think when you keep at something its going to pay off you just don’t know when.

MDB – What made you want to go to Cleo and not sticking with another food network?

JS – We were approached. Powerhouse productions approached Jaz and to do this show and it’s great because it has a cooking component and a home component. It’s a design show and then we cook for a reveal party. And I have another passion of mine which is building furniture. So I get to build in the show and cook in it. So when it was brought to me I was on board immediately. And then getting to do something on a network that is young and up and coming and people are excited about. I mean That’s what excited me for sure. But it’s definitely something for the culture and its’ definitely something that excites me to get out there with our people and have fun.

MDB – The Family Table is something your family actually did, your mom built tables for the family but do you actually have a furniture company?

JS – I do actually have a furniture company. And I sell tables and beds, I haven’t sold to the major public yet, but I make pieces for people I know. I’m gearing up for 2019 to launch some pieces and start small, and I’m also launching a food brand. It’s the year I’m turning 30 so there’s a lot going on in 2019 for me.

MDB – What’s the backstory for your mom building tables for the family year after year? Did her parents build tables?

JS – My mom is superwoman. She is absolutely the most creative person I know. It started out just as a necessity. My parents didn’t have money when they started having kids, and they didn’t have their own families to help them out with furniture to set up places that they moved into. So out of necessity my mom would go see these beautiful items that were very pricey and she would build them herself. My mom just has an eye for that. She is the type of woman where nothing is going to get in the way of something that she wants, so she’s going to find a way to do it. I’ve never slept in a bed that wasn’t built by my mom. I’ve never slept in a bed or eaten at a table that wasn’t handmade, and that’s played out in my own life. Where no bed can be better than one that I’m going to make, it’s not going to be stronger; tables, couches, none of it.

MDB – Your family released a cookbook earlier in the year called The Family Table, and Jussie said that “it’s a love letter to our childhood,” can you explain that more and the process for writing the cookbook?

JS – The process was a two year long endeavor. No one prepared me for the intensity. It was a definitely a labor of love. We call it a cooking memoir because it really tells the story of our family through food. And I don’t know if you come from a big family but when you have a large family but most celebrations, well everything is surrounded by food. So we decided after we all did the cooking show together to put all of our recipes in a book, and have it for the next generation. There’s 130 recipes in The Family Table, and it really is the food that we grew up eating, reimagined. I cooked all the recipes in the book and tested them out, and Jaz did the baking.  It’s one of those things where it’s like you’re going down memory lane when you’re cooking all of these things that you grew up eating that you forgot about. So it definitely was a love letter to our childhood in the way of food bringing everyone together.

MDB – You’ve done so much and had so much success with your cookbook and several cooking shows but what would you say is one of your end goals?

JS – The end goal is to give back to the community. I mean that’s always the goal and what we all are doing this for, to be able to be at a point where you can give back to others. My mom was an activist and still is, and she instilled in us that none of this matters, none of this means anything if you’re not passing the torch.

There’s just a lot I want to do. I have my personal goals, of course, I want grocery stores, and I want restaurants, and to grow my food brand and my home brand. I have so many gifts that God has given me that I just want to explore but what it really comes down to is just giving back, that’s the ultimate goal.

MDB – What do you want people to leave with when they watch your new show on Cleo TV? Also, what can we expect? Celebrity guests?

JS – I want them to leave knowing that if you learn a few things from this show then you can live the luxury life. It’s all about living your best life. It’s about living a life of fulfillment and coming home to after work where you can decompress. So I want people to leave with knowledge. There is a lot of knowledge in this show about how you can build knick knacks, how you can do things that aren’t going to cost an arm and a leg. People can see how easy it really is to make date night dinner, or a family meal, or a headboard. I think the main thing for people to know is that it’s not such a daunting thing to cook and build and redesign, it’s easier than people think. And we have a lot of surprises and a lot of fun people coming on board, it airs on March 19th.

Michael B. Jordan Takes On Super Character In New Anime