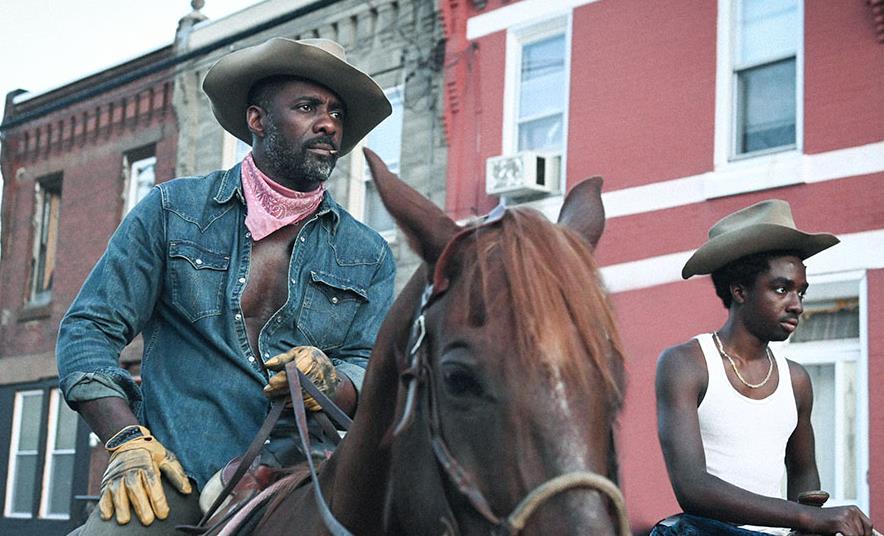 Every month The Reel Effect gives you the only list you need for April television and movies releases starring black talent! This month we have 13 projects, each reflecting diverse narratives and strong Black talent to tell you about, check them out below!

This film stars Idris Elba and Caleb McLaughlin in a father-son coming of age story set in North Philadelphia. When McLaughlin’s character, a troubled teen from the city is urged to go spend the summer with his father played by Elba, he’s introduced to a whole new culture of cowboys and horse training. Concrete Cowboys is produced by Lee Daniels and also stars Lorraine Toussaint, Jharrel Jerome, and Clifford “Method Man” Smith.

In this powerful biopic, Robin Roberts presents Mahalia. Danielle Brooks takes on the roll of renowned gospel singer Mahalia Jackson and shows her rise to fame and her struggles and involvement in the Civil Rights Movement.

This four part documentary – series premiering on HBO Max, takes a look at America’s dark past of colonizing and civilizing our country. Filmmaker Raoul Peck (I Am Not Your Negro) dives in headfirst to this violent and solemn past of our nations founding, dissecting what was and how we have come to what is.

This Academy Award nominated short film stars Joey Bad Ass, Andrew Howard and Zaria Simone. Joey Bad Ass as cartoonist Carter James repeatedly encounters the worst case of deja vu as he attempts to get home to his dog but instead deals with a recurring deadly encounter day after day.

Comedy and action meet face to face in this film starring Octavia Spencer and Melissa McCarthy. Spencer’s character plays a genetic scientist who has completed a unique formula to give humans super powers. When that formula is accidentally injected into her best friend played by McCarthy, the two team up to defeat a budding rival wanting the same formula.

From executive producer Lena Waithe and creator Little Marvin comes this horrific drama series of an African American family moving into a majority white neighborhood. Set in the 1950s, this family is doing their best to fight back against racism, hatred, and something even more sinister.

In this season two premiere, Forest Whitaker returns to his role as Bumpy Johnson ready to fight for what’s his when he meets Malcolm X, played by Nigel Thatch, and his alerted about the dangerous drugs being pushed throughout the community. The two band together in resistance against the war on drugs, territory, and white supremacy.

In his much anticipated return to sitcom, Jamie Foxx takes on the role as a full time father to teen daughters after their mother leaves home. The comedy will show the dynamic between a newer and older generations also starring David Alan Greer and Porscha Coleman.

Issa Rae’s own Hoorae Productions and TT The Artist presents, Dark City Beneath the Beat comes this documentary about the community within Baltimore, Maryland and a group of youth dancers navigating through socio-economic struggles with their gifts of dance and unique sound.

Time seems to be the enemy and the solution in this psychological thriller film. Anthony Mackie stars as a paramedic responding to several strange happenings that he and his partner relates to a new drug plaguing the city of New Orleans. When the trouble hits home, Mackie’s character is pulled in himself and must fight his way out, but can he?

Waking up on a launched spaceship, Shamier Anderson plays Michael Adams who has become an unintentional stowaway on a two year mission to Mars. In this sci-fi thriller, everyone aboard the ship, including Zoe Levenson played by Anna Kendrick, Marina Barnett played by Toni Collette and Kim played by Daniel Dae Kim becomes cautious; a trip that was originally meant for three becomes compromised when a fourth passenger appears.

After a trailblazing first season, Robin Thede, Quinta Brunson, and Ashley Nicole Black return for season two of this Emmy nominated sketch comedy. In the first season, giving the perspective of a multitude of “vibes” and “moods” of Black women on a daily, this season is sure not to disappoint.

Based on the 1993 novel, “Without Remorse”, Michael B. Jordan plays a Navy SEAL seeking out revenge for the brutal attack on he and his family. He’s armed and dangerous tracking down what the government says is a foreign attack; but he’s not buying it and is willing to risk it all to uncover the truth.