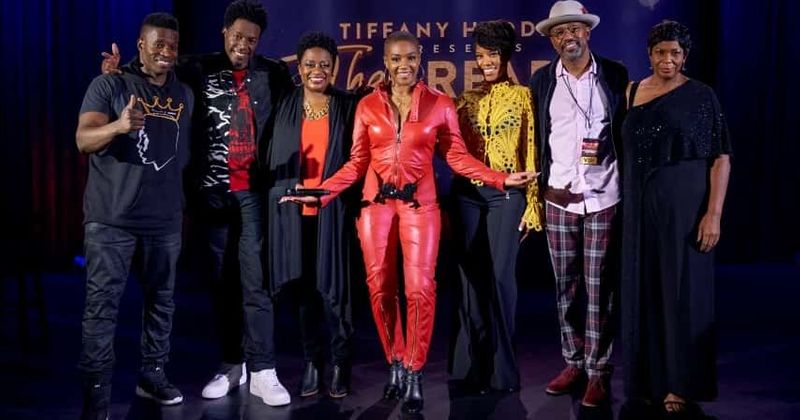 February is dedicated to Black History Month so of course it makes sense that so many Black television shows and movies are dropping this month! On top of every network dedicating their February content to Black history month specials, so we wanted to make sure you have a list of this month’s Black releases that you can enjoy past the month of February. Every month The Reel Effect with be dropping a list of the newest Black releases to hit your television screens and the movie theaters!

Comedian Tiffany Haddish continues her Netflix series They Ready bringing together a new set of comedians for their own 20 minute sets. This season Haddish deliberately wanted to showcase all Black comedians with the line up including Godfrey, Tony Woods, Barbara Carlyle, Erin Jackson, Kimberly Clark, and Dean Edwards, and of course Haddish dropped the series during Black History Month! Watch full seasons one and two on Netflix February 2nd.

Set in Montgomery, Alabama in the 1960s a Klansman’s grandson has to make the tough decision to decide what side of history he wants to be on during the Civil Rights Movement. This true story is based on Bob Zellner’s autobiography “The Wrong Side of Murder Creek.” You can watch this film starting February 5th on streaming platforms like Amazon Prime Video.

This romantic drama stars, David Washington, a up and coming film director and his girlfriend, Zendaya, a beautiful couple that get into a heated and truth revealing argument after the opening night of his movie premiere. Watch Malcom & Marie on Netflix on February 5th.

Launched in Miami in 1999 the Super Bowl Gospel Celebration continues to grow each year and is a highlight for many football fans each year. The event is the only Gospel concert sanctioned by the National Football League (NFL). This year it will be hosted virtually hosted by Rickey Smiley with special guest appearances by Dak Prescott, Deshaun Watkins, Kierra Sheard, John P. Kee, and more! Tune into the even Sunday, February 6th at 8pm EST on BET.

CBS has teamed up with Queen Latifah to bring to life a revamped television version of The Equalizer. The series follows Robyn McCall (Latifah) who appears to be the typical single mother raising her teenage daughter but really McCall is a former secret agent. McCall is using her skills to help those that cannot help themselves. The Equalizer premieres right after the SuperBowl on February 7th on CBS.

A celebration of African American artists is presented in this Sam Pollard HBO documentary, Black Art: In the Absence of Light. Showcasing the late artist David Driskell and his exhibit Two Centuries of Black American Art, which became the first major art exhibition to give an examination of the history of Black art in the United States since 1750. Driskell unfortunately passed last year, at the age of 88, due to Covid-19 complications but was interviewed for this documentary before his passing. Black Art: In the Absence of Light premieres on HBO on Feburary 9th at 9pm EST.

In this one hour special, Robin Roberts looks into the history and legacy of the Tuskegee Airmen and how these courageous men helped end segregation in the military and mold history. Tuskegee Airmen: Legacy of Courage airs on the History channel at 8pm EST on February 10th.

This six part documentary series tells the story of how the American streets helped shape hip hop culture and influence mainstream music today. Previously, hip hop was just an expression of survival, struggle, and defiance but now is one of music’s most dominant genres. Forty years of musical history is broken down in this limited series that you can check out on February 10th on FX at 9pm.

It has been over fifty years since Winston Salem State University won their first NCAA Championship in 1967. The made history by being the first HBCU to win a NCAA Championship. This Black History month CBS Sports is debuting a new documentary about the dream team and NBA Hall of Famer Earl “The Pearl” Monroe’s legacy and impact in the community of Winston Salem. The documentary is voiced by NBA All-Star and Winston-Salem native Chris Paul and premieres on Thursday, February 11th at 7pm EST on CBS Sports. Watch the trailer and read more about athlete and coach cameos here.

After getting caught up with the feds William O’Neal (Lakeith Stanfield) takes a plea deal by the FBI and infiltrates the Illinois chapter of the Black Panther Party to gather intelligence on Chairman Fred Hampton (Daniel Kaluuya). This Fred Hampton bio-picture has been in the works for years by the Lucas brothers and Will Berson who wrote the screenplay. The film was finally put into motion in 2019 after receiving blessings from Fred Hamptons family to make the movie which was directed and produced by Shaka King. You can watch Judas and the Black Messiah on February 12th on HBO Max.

Lifetime is releasing a Good production on February 13th. This true story shows the crazy journey of a woman who faked her death after her husband hired a hitman to kill her. Meagan Good and her sister La’Myia Good star in the movie as sisters, along with Chiké Okonkwo (Being Mary Jane) playing Good’s psychotic husband. Set your DVR’s for this crazy Lifetime premiere set for February 13th at 8pm CST.

This documentary is an intimate four hour, two part series produced by Henry Louis Gates Jr., that tells the 400 year history of the black church in America. The Black Church: This Is Our Story, This Is Our Song breaks down how Black people were able to use Christianity as a survival tool, making it their own but incorporating their African rituals and traditions helping to evolve Christianity into what it is now. The series premieres on PBS on February 16th at 9pm EST.

Dwayne Johnson finds himself running for President in 2032 and uses this time to reflect on his childhood and adolescence. This half hour comedy gives us a first hand look at Dwayne “The Rock” Johnsons upbringing with his mother and pro-wrestler father, and all the crazy mistakes, obstacles, and wins he gained throughout the years along his journey to stardom. Young Rock premieres on February 16th at 8pm EST on NBC.

Comedian and actor, Kenan Thompson stars in the new family comedy all about how we manages to juggle his job as a television anchor and raising his two daughters as a widowed father. It becomes more of a three man job where Kenan gains help of his father in law and his brother. Catch the premiere of Kenan right after Young Rock on NBC at 8:30pm EST.

The Bordelon family returns to use in the season five premiere of Queen Sugar! This season picks right back up with Charley (Dawn-Lyen Gardner) in the thick of things with the Landry family while she continues to become more involved with local politics to help the farmers in the community. Nova (Rutina Wesley) finds herself releasing her own community website while continuing to grow her relationship with Calvin. Ralph Angel (Kofi Siriboe) finds himself continuing to fight for his land, while raising Blue and trying to stay in a healthy relationship with his girlfriend Darla. Tune into the premiere on February 16th at 8pm EST.

Tyler Perry shocked us all when he announced Madea would be retiring and would no longer be on stage! To celebrate Madea’s retirement Tyler Perry brought together a star studded group of Madea’s favorites to go on tour one last time and now we get to witness it for ourselves! Originally debuted on BET + the play is moving on over to cable on February 16th at 8pm EST.

One of the greatest jazz musicians of all time spent a large part of her career performing, traveling the world, and being loved by fans but Billie Holiday was also being targeted. During her career, the Federal Department of Narcotics set up an undercover sting operation led by Black Federal Agent Jimmy Fletcher, the two would ultimately have a tumultuous affair. The United States vs. Billie Holiday shows us the singers journey with addiction, fame, love, and heartbreak. The film airs on February 26th on Hulu.